If you need to catch up, check out Part I and Part II before proceeding. Or just read on and if you get lost, I warned you…

Now Chris and I are both working full time. He was working at Wallops Flight Facility and I got a job at Atlantic Animal Hospital. He had a 30 minute (23 mile) commute, I had a 10 minute (4 miles out, 3 miles back) commute. His job paid a LOT more than mine and his hours were more flexible than mine so I couldn’t feel but so bad for him and his commute. Though he did realize it was a good thing that he could make a 23 mile drive in under 30 minutes. In California a 23 mile drive would’ve taken at least 45 minutes to an hour no matter where we were going.

I was home long enough with the dogs and cats before I started working to get them well acclimated to their new home and surroundings. Chompers and C.J. were both the most trustworthy dogs on the planet, so I never had to worry about them getting into anything they shouldn’t. I just worried about them chasing critters outdoors, especially at night, and that only happened when we were home with them.

PRODUCT PLUG: Noxgear Lighthound Vest has been a GODSEND for us since moving to the Eastern Shore of Virginia! 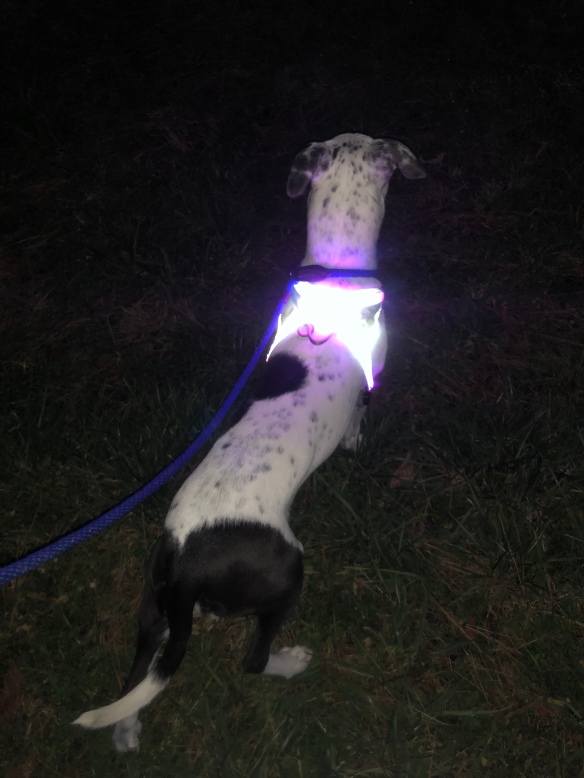 Esme sporting her Noxgear Lighthound vest during an evening stroll.

After being at the animal hospital for a few weeks, I had a conversation about the ticks in the area. My dogs were on Frontline Plus but I would still find numerous ticks on them, some were dying but several were engorged, enjoying a nice blood meal. One of my coworkers had suggested we get some chickens on the property. The chickens love to eat bugs, including ticks. Someone else had suggested we get guinea birds. Chris and I discussed it for a few weeks and decided on giving chickens a try. Before we even had a coop built I brought home a dozen little baby Silkies.

It took only a weekend to erect a small chicken coop. I came up with the design and Chris helped me build it. I thought I did pretty good considering I am not a carpenter. 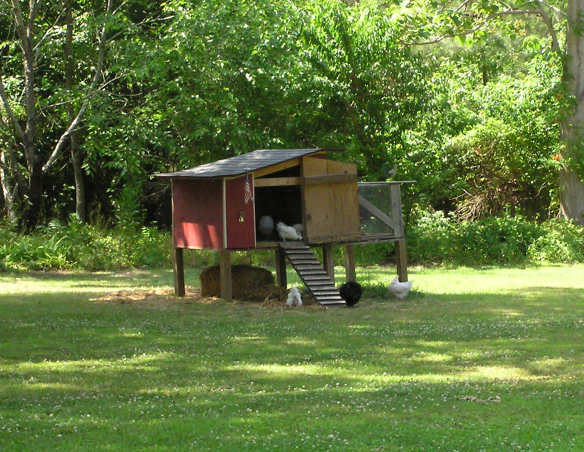 Our first Chicken Coop. It was small, raised and completely enclosed. It served its purpose for a few years before we realized a few design flaws!

A few weeks after we brought home the biddies, they were ready to go to the coop. We confined them in the coop for about 2 weeks, then started letting them out to explore the yard during the days when we were home.

By early Spring the chickens were well acclimated to their home. We would let them out to free range when we were home, and they would return to their coop every evening. I had zero experience with raising chickens prior to bringing these home. I have to tell you, it was pretty easy to raise them from hatchlings to free rangers! I was not familiar with this particular breed of chicken either and thought they were the cutest things ever. They are a small, bantam type chicken with fluffy plumage. We called them our poodle chickens. 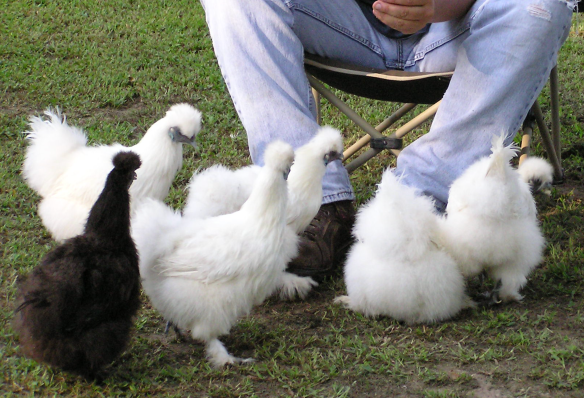 Our silkies were very friendly and personable, and loved a snack of stale bread or left-over French fries.

By late spring we started to notice that we were no longer finding ticks on our dogs or us. Then there was a little added bonus that started to appear in the coop…eggs!  And they were the best-tasting eggs we’ve ever had.  When we had extras we’d share with our friends and neighbors.  If we were going to be making a trip to the midwest to visit family, we were sure to bring eggs with us.  Chickens.  Who’d-a thunk it when we were leaving California…

In the years that followed, we both completely embraced the rural lifestyle of the Eastern Shore of Virginia.  We have met some very amazing, interesting, and wonderful people during our time here.  We had come to truly accept this as our home.  We felt at home.  We wanted it to be our permanent home.

Then things started to get a little rocky for Chris at Wallops.  His project was losing funding and he wasn’t sure whether or not his position would still exist when it was time for contract negotiations.  Every year he managed to still have employment!  Until the summer of 2017.  The project was no longer getting any funding.  At least not enough to keep him on it.  He got laid off.

…To be Continued…  Stay tuned!  And thanks for following along!

This site uses Akismet to reduce spam. Learn how your comment data is processed.