I have heard and read many anecdotes about marathons and how they are life-changing, strength-building, mind-blowing and awe-inspiring. Others describe how they are a miserable, painful, torturous experience. Now I get it. Both sides.  I had the wonderful pleasure of experiencing both perspectives of the marathon in one single event.  My first marathon was both Awful and Awesome.

In the days leading up to the Yuengling Shamrock Marathon, I was excited!  It was going to be a wonderful weekend with an amazing group of women, two of us hoping to accomplish the goal of finishing our first marathon.  As the day neared, the weather forecast was becoming more accurate.  A week out it looked like we were going to have great weather for running.  Clear-ish, a high near 70 and mild winds.  The day before it was predicted to be cool (high in the upper 40s, lower 50s), rainy and windy.

I am a fairweather runner when it comes to fun and training.  I choose the elements I am willing to run in.  I have learned that I can run in most anything, except wind.  I hate wind.  No matter the temperature though, cold and windy trumps warm and windy when it comes to the suck-factor.  I can bear running in the cold (sub-zero) temperatures when it’s not windy, but it is getting more and more difficult with age.  (Are any of you familiar with Raynaud’s Phenomenon?  I have developed it over the last 2 years.  And it’s only getting worse.  It’s annoying and painful.  If any of you know how to prevent it, please share!  It SUCKS!)  When it comes to race day, I will deal with the elements as they are presented to me.  I may not like it, but I will deal with it… 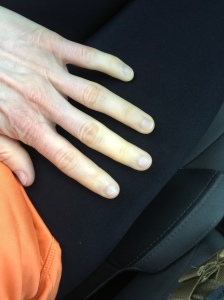 Raynaud’s Phenomenon in my hands.

So, it’s the afternoon before the race.  My Shamrock buddies and I arrive in Virginia Beach.  Two of them are having some pre-race anxiety.  I understand the anxiety because, for one, it was her first marathon after a DNF marathon a few months prior (injury); the other was in my boat…it was her first.  I was still excited.  I’ve run many organized races prior, but only one half marathon and the rest were 10 milers and less.  No marathons.  But I wasn’t filled with anxiety.  I was filled with excitement!  Even with the pending weather.  Like I said, wind is my foe (if I go to hell, it will be windy as can be!).  Of all of Mother Nature’s phenomena, wind is my personal least favorite.  And it was looking like 26.2 miles of hell for me.  I signed up for this, like any other race, knowing the weather would be unpredictable.

The pre-race expo was awesome!  After picking up our race packets, we perused the vendors.  There was everything from clothing and gear to bling and more races.  And there was even a vendor with dog treats!  Which was awesome since my most dependable running buddy was able to accompany me for this feat.  He couldn’t join me for the run but he was there for support before and after.  So he was treated well with goodies from Best Bully Sticks!  The lamb lung chewies and pizzle sticks were a home run. 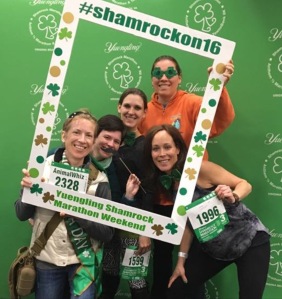 Pre-race Expo with my “team!”

The morning of the race, we all met at my hotel room (because it was close to the start line, and another of our group was spending the night there as well!).  The room was filled with all kinds of excitement and anxiety.  I tried to calm the anxious by offering a shot of sake.  They all chose to decline. So I did a shot of sake solo.  I figured it couldn’t hurt.  I was about to run 26.2 miles in the WIND and rain!  This was going to be AWFUL!!!

Lucky for us Shamrock Marathon runners, the rain had stopped by the time the gun went off.  The half marathoners had to deal with the rain (and wind; to all who finished the Shamrock Half…you have my utmost respect and admiration!!!) as they took off an hour before we did.  I was eternally grateful that I didn’t have to run in the rain and wind!  I truly admire the half marathon finishers here!  You are all AWESOME!!!

At the start line, the majority of us were covered with plastic ponchos or trash bags.  Our best attempt at staying dry.  It was drizzling on our way to the start.  But the rain took pity on us and stopped minutes before we started.  Ponchos were tossed from all within the first 2 miles. I shedded mine around the start of mile 2.  I was being conservative. 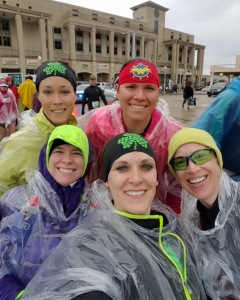 At the Start Line

The first 6 miles weren’t so bad.  We had the wind at our backs for the most part.  And we were sheltered by buildings.  Heading back from whence we came though was a different story.

The turnaround was just before mile 6.  But the wind wasn’t terrible because we were still sheltered some by trees and buildings.  Running through Camp Pendleton was a little breezy but still not so bad.  Then we had to head back to the boardwalk.  At mile 9 things really started to get crappy.

The wind was in our face since the mile 6 turnaround.  But we had some protection from buildings and trees.  By the time we reached mile 9, our protective barrier was dwindling, and by mile 10 we were on the boardwalk.  The Atlantic Ocean to our right, hotels to our left.  The wind was from the North.  Blowing right into our faces!!!  This went on for 3 miles!!!  It was awful.  I hated every second of it.

At mile 13 we turned off of the Boardwalk.  The wind was still in our face, but we had a buffer of tall buildings on both sides now, so it helped some.  Some.

By mile 16 we had a reprieve.  Miles 16 to 19 were well sheltered from the wind.  But they managed to sneak in a 3 mile long gradual incline.  When you’ve been running for more than 6 miles, you notice hills no matter how small!  It was all uphill, but very sneakily so!  No matter, it was sheltered by trees and the wind was nil.

At mile 19 we turned into Fort Story.  We were again along the ocean front.  Hello wind!!!  This is where I hit the wall.  I was done.  My body was done.  I was done.  I just knew that there was no way I could finish this.  I still had 7 miles to go and I was spent.  But I managed to get into my own head and tell myself that I had made it this far!  I couldn’t give up now.  If I had to walk the entire rest of the distance, so be it.  But I had to keep going.  My hamstrings hated me.  I put the “what-fo” on them and trudged along.  By mile 22, the point where the wind was at our back, I was over it!  Knocked that wall down with a banana and a short walk and stretch break.  As I regained my composure, I saw a runner ahead of me that looked familiar.  It was my Physical Therapist!  Holy awesome!  I tapped him on the shoulder and said hi, I might need you at the finish line!  At that point I had realized someone was looking after me and I took off!  The 4:15 pacer was right behind me!!!  Darn it, I’m going to finish with them!!!

After collecting my medal and the other awesome swag offered, I was greeted at the finish line by my friend Sarah (the other first time marathoner), my husband, and my most dependable running buddy C.J.  It was so great to be finished!  But standing around in the cold and wind really started to suck.  There were no plastic silver blankets waiting for us at the finish line.  We did all get beach towels as part of our swag, but it just wasn’t quite big enough to wrap up in to keep warm.  We all waited for everyone in our group to finish.  When the last two got in we promptly headed back to the hotel room to change. 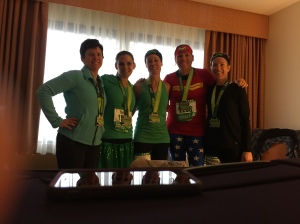 I really didn’t want to stop moving because I knew I’d cramp up.  So I put on some clean, dry and warmer clothes and decided to take CJ for a stroll.  It started raining, my left knee was in pain, and I had a painful blister on my left pinky toe.  Walking was doable but painful, and the darn weather made me turn back.

Since I couldn’t walk around much I spent the entire rest of the evening stretching.  We walked a couple of blocks to dinner, and back.  Then more stretching.  I was feeling a little tight in the hamstrings and the knee was achy.  My hips felt great though, so that was a bonus.

The next day I awoke to very little discomfort.  My knee felt almost bruised and a little swollen, but the pain was minimal.  The rest of me felt almost normal.  This is about when I decided I will definitely do another marathon in the future.  However, it will be a fall or early winter marathon. I am not equipped to handle running in the cold weather. And I definitely never want to run along the Virginia Beach boardwalk in March again!  Unless it’s 60+ degrees with no wind and I’m guessing that doesn’t happen often in March.

I did it and managed to survive my most dreaded elements.  I just hope I am able to experience my perfect marathon one day! 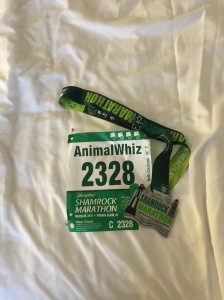 Now to prepare for my first Ragnar Trail Relay…

This site uses Akismet to reduce spam. Learn how your comment data is processed.